The Emergence of Modern Israel

In this semester-long course, students will study the history of modern Israel from the rise of the modern Zionist movement to the present. Following an exploration of the historical and ideological foundations of Zionism,  students will trace the political and institutional development of the yishuv, the establishment of the State of Israel, and the events of the decades following.

Issues discussed include the evolving Palestinian-Israeli and Arab-Israeli conflict, relationships with world powers, the political system, religion and society, the place of minorities in Israeli society, and the quest for Israeli identity.  Through the study of scholarly texts, primary sources, and virtual field trips,  the students will gain a richer understanding of modern Israeli history and its current position in international politics and the Jewish community.

“[She] had a wonderful experience. She learned so much from this course and enjoyed everything about it – the fabulous instructor, the course materials, the assignments, and the mix of the individual work, discussions, and live classes. I only heard positive feedback from her throughout the semester. Thank you so much for all your help in making this happen. – Anna, parent of 11th grader 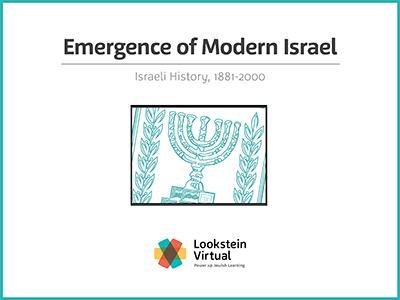 For parents: email us at admissions@lookstein.org
for more information and to register.

For teachers and administrators:
please complete the form below to get started.